The debris of Hashima Island shows what the earth would look like if man disappeared overnight. An apocalypse with a bleak past.

If you approach the island of Hashima near Nagasaki, which is only a little over six hectares in size, the deserted isle leaves the impression of an old warship lying at anchor. No wonder, people here often call this place Gunkanjima, the battleship island. But the Menacing impact of a mighty battleship somewhat evaporates in less than a moment, if one enters the island.

It also has Iron, tons, steel, but what reveals itself to the viewer above all are images we have in our heads about life after the apocalypse. Close together, interrupted only by narrow alleys, line the ruins of a city compressed into the smallest space up. Concrete is crumbling down, windows broken, and nature has reintegrated the island. Viewing into some apartments sends a shiver down your spine. Here and there, you can still find furniture, an old television, and in the back, descending is an almost equipped dental clinic. The pattern of decades now covers everything, leaving the impression that the inhabitants have left this place in a hurry. Those who have even a hint of frightfulness in themselves show no interest in being on Hashima Island after dark.

There would be enough reason for ghosts seeking revenge because the history of this small island off the Japanese coast has its grim sides. Between 1887 and 1974 they used to mine underground there, where the miners lived close to their families leaving an entire infrastructure behind. But from year to year, they built many other buildings underground because there was no space left above. One can search for a long time to find a spot where more people would have lived crammed together.

But the darkest hour the island experienced during the 2nd World War was when instead of Japanese miners, people from Japan-occupied Korea were brutally relocated and put to work as forced labor.

They transformed Hashima into an individual death camp. Even worse treating them as slaves, because the supply of forced laborers seemed endless, the coal that ran the Japanese war machine kept them mining afloat without respect for human life. Escape was no option. Those who dared to jump over the high quay walls into the sea drowned.

After World War II, the Japanese miners returned, until on January 15, 1974, and the energy reform of Japan brought the surprising closure of Hashima Island. In April of the same year, the last boat left, leaving the island behind for decay. Three months may seem like a long time, but in fact, many inhabitants split in a whisk. What else could they do, as they were unemployed and despite the development of an infrastructure that included a swimming pool and cinema, life there was not pleasant for the miners either? They left behind a lot of things because it seemed uneconomical to transport them elsewhere. It is stunning that for many in Japan now, Hashima has turned into a synonym for the ruthless exploitation of man in the industrial age.

For more than 30 years, access to the island was forbidden. Not everyone adhered to it, here and there graffiti and other remains bear witness to the fact that even before 2009, when they lifted the absolute ban, people visited the island again and again. It is said that especially young people from the district show a magic attraction to the isle over and over. In this milieu, it is often called the ghost island, as it seemed like a real picture of dark dystopias reminding of animated films. 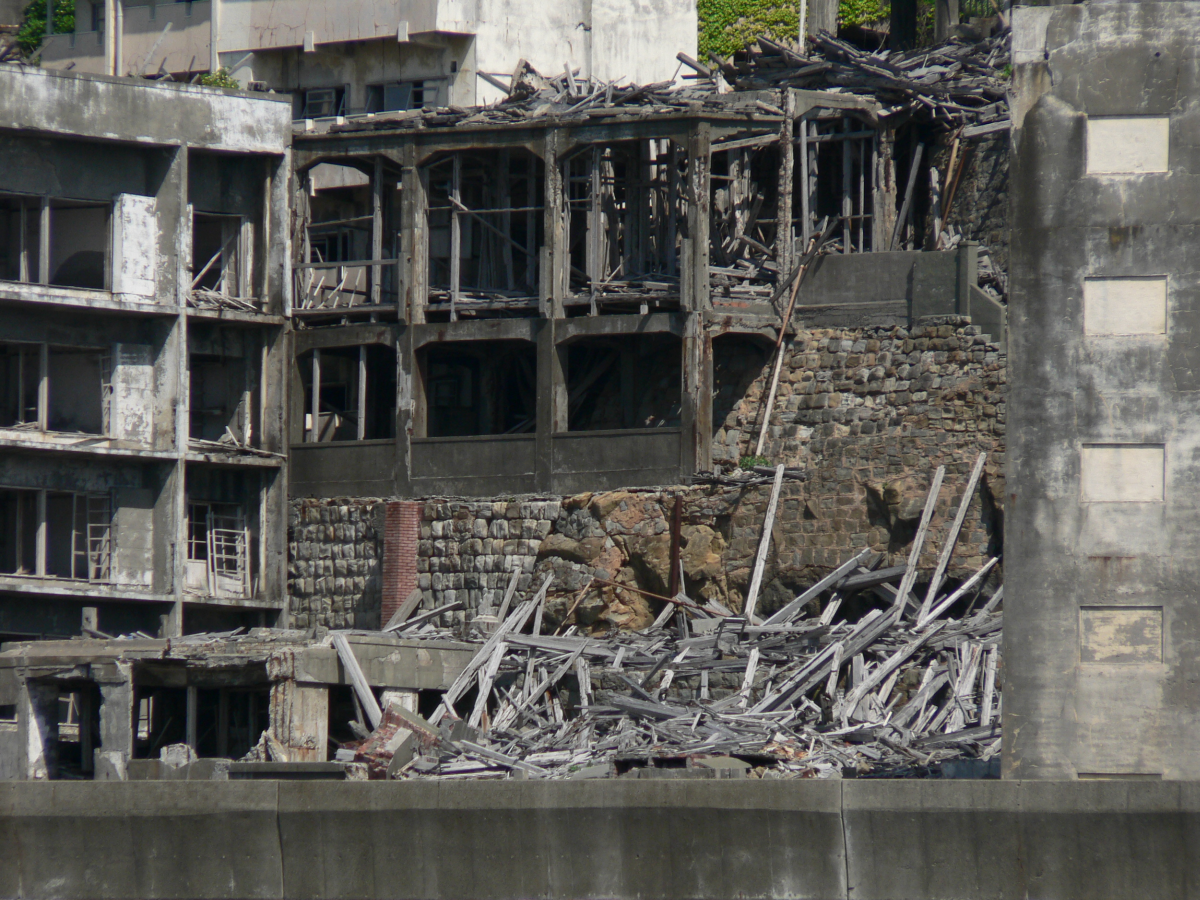 Since lifting the complete ban, now tourists are allowed on the island. Their bad image has also become known far beyond Japan in some movies, like the James Bond movie Skyfall.

Since 2015, the island is included in the UNESCO World Heritage List. But among all the castles, temples and magnificent buildings there, Hashima Island – Gunkanjima is becoming a monument of exploitation by man through industrialization and the horrors of war. And yet the island seems to be of a gruesome beauty that no viewer can escape.